With this year’s re-launch of my blog, I wanted to create a category called “My World” – a little collection of posts that are very personal and unique to me and can offer those that might be interested, some insight into, well, my world. This category is where you’ll find “dear diary” scribbles, some peanut-gallery opinions I might get the urge to share from time to time and, generally, just a few glimpses into my life “behind the scenes”.

As it happens, I am very excited to introduce the “My World” category to you by means of a true story about a one-time Hollywood crush of mine, Colin Farrell, and – as the title of this post suggests – how I ended up in bed with the man. 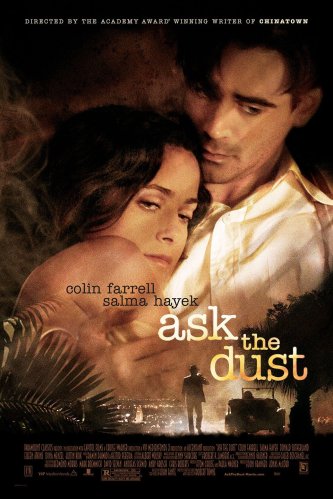 The 2006 film was set in Los Angeles, but filmed almost entirely in South Africa

At the time that this all played out, I was in my very early twenties and full of beans, to put it mildly. It was circa 2004 and I had read in a local gossip magazine that Colin Farrell was in town filming a Depression-era romantic drama with Salma Hayek called Ask The Dust. It was apparently being shot at Pinelands High School. Now, just to give you some very relevant background here: at the time, in my little world, Colin Farrell was The One. The rugged good looks, the Irish accent, the bad-boy attitude and general cockiness…it was all just too much for my and my starry-eyed, impressionable self.

So, given the amount of metaphorical beans in my system and the severity of my (for lack of a better word) “crush”, there was really no doubt in my mind that I had to make a plan to meet him. Of course, the ultimate goal was to get him to fall in love with me and propose, but the necessary “pre-goal” was to at least let him know of my existence.

So (…and even I can’t believe this as I am re-telling the story), I decided to grab some random wannabe model photograph of me I had lying around (at least it was taken by a very talented photographer, so it wasn’t a complete disaster), get in my car and drive to Pinelands High School. I scribbled my name and number on the back of the photograph with the intent of handing it to whomever was in charge of casting. Just to be clear: I had no agency, I was certainly no actress and I had never done any work on a movie set before. I was literally just taking a Big Fat Chance. 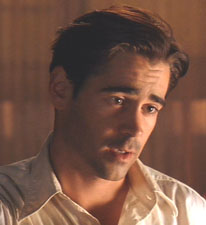 I will never forget, as I arrived at the school, stepping onto the sports field next to the parking lot and bumping – slap bang – right into Mr Farrell. Of course, I pretended to barely notice him and continued straight into the building where I ended up handing the aforesaid random photograph to someone who worked there. He told me they had already cast all the extras they needed, but they would let me know if anything came up.

Six weeks later, I got a call from Moonlighting Films, the local production company shooting the film. They wanted to know whether my hair was still brunette (I was literally sitting in a hairdresser’s chair at the time, about to get highlights) and they also enquired as to how tall I was. After answering their questions, in a state of complete disbelief, they asked whether I wanted to be the the stand-in for Idina Menzel, one of the supporting actresses who played the part of Vera Rivkin in the movie.

Idina Menzel, in the supporting role of Vera Rivkin

A few days later, I was on set with Colin, Idina and the whole darn Hollywood gang. After the second or third day, Colin and I began greeting each other in the mornings (he knew my name, so I guess my “pre-goal” had been accomplished). Most of the time, I acted extremely disinterested in him (probably not the best way to catch the attention of a Hollywood mega-star), but I was young and it was probably just too much excitement for me to handle. My job basically involved ‘standing in’ for Idina, so that lighting, angles and positions could be pre-determined prior to her arriving for the actual takes.  Seeing as many of her scenes involved Colin, let’s just say, I was often in close proximity to the man. In fact, and, yes this was the highlight, I will never forget having been instructed to lie on a bed that Idina and Colin would share in one scene, and Colin plonked himself down on the bed right next to me. As if that wasn’t enough for my little beating heart to bear, one of the production assistants came around and offered him chocolates, which he, in a most gentlemanly fashion, offered to share with me.

After production had wrapped and Colin failed to show up to the wrap party (to my great disappointment), the fairytale was instantly over. Fortunately, my school-girl crush has in the interim died rather a dramatic death. So – while I can now certainly live with Colin’s departure from my life – I will always relish the memory of lying in bed, right next to my biggest Hollywood crush, being offered chocolates by him (and, of course, politely declining).

Seeing as I don’t have any actual photos of The Incident, herewith the film’s lead characters, Arturo and Camilla, sharing an intimate moment in bed. My and Colin’s incident wasn’t quite as up close and personal as this, but it was unstaged, spontaneous and certainly good enough for a starry-eyed Capetonian girl.